Showing posts from August, 2016
Show all

CLAP FOR ME, OR I CLAP FOR MYSELF: MY WRR STORY 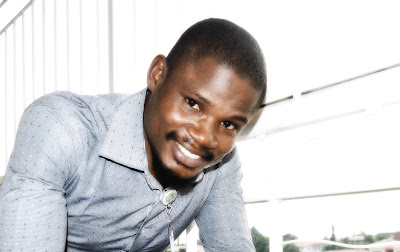 In August 2012, what many of you know today as WRR, began as a Facebook page – Words Rhymes And Rhythm. The page was largely for self promotion and the name was taken from my old poetry notepad on which I first wrote the words WORDS RHYMES & RHYTHM in 2002/3. It was to be the title of my first collection of poems. At the time, most of my poems had meter, rhyme or both. Anyway, through the year 2013, the page grew to from my one like, thousands, fuelled by the brewing interest in poetry and the focus on young and largely ignored poets and the support of people like Sir Eriata Oribhabor, Dike Chukwumerije, Elaine Polin, Bridgite Poirson, Albert Jungers and Passy Amaraegbu. We soon became a force to reckon with, stoking the skills of many a young poet with the social interaction platform, as WRR was then know. We had subdivisions from the main WRR – VerseUp, Poetivists and Authorpedia (later we added the WRR College of Poetry). That was the year I published my first book, WHAT
Post a Comment
Read more

ON THE OTHER SIDE OF YESTERDAY 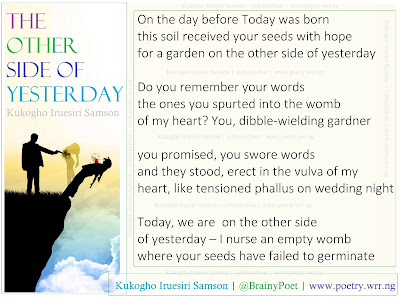 On the day before Today was born this soil received your seeds with hope for a garden on the other side of yesterday Do you remember your words the ones you spurted into the womb of my heart ? You, dibble-wielding gardner you promised, you swore words and they stood, erect in the vulva of my heart, like tensioned phallus on wedding night Today, we are, on the other side of yesterday – I nurse an empty womb where your seeds have failed to germinate
Post a Comment
Read more
More posts