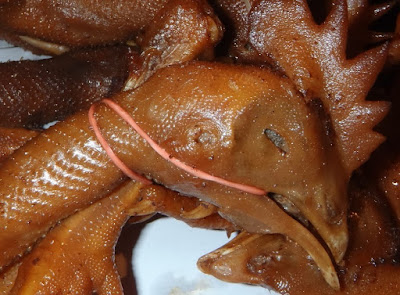 In our childhood days, as soon as grandma identifies a chicken as the next to feel the edge of a blade, the head would automatically become the ‘most wanted’. Every one of us – a teeming pack of cousins, would begin silent prayers, hoping to be the one to land the head – more so if it’s a gangly cock.

Anybody watching our body language as the chicken is plucked and cut into pieces then dunked into the soup, with or without frying, would assume that we are excited about the chicken itself – but that is not entirely true. Though, the prospect of eating chicken, a temporary departure from the normal titus/sardine fish most families eat in those days, may be a cause for excitement for us kids, the real deal was the head of the chicken. We were not like kids of these days who scramble for chicken laps (drumsticks?). The head was what we wanted. It was the ultimate trophy.

You see, as kids – living with the many cousins in grandma’s house, we had three silly things we used to rate the quality of a meal: the size of the ‘meat’ you are given; how complex it is to eat that meat; how long you are able to hand on to the meat before the last chunk goes down your gullet. The size of the meat is important because it gives you an automatic bragging right over the others; the complexity of the eating, say a chunk of meat hanging on a huge bone that has a soft core (marrow), also becomes important because you now have an excuse to keep eating your ‘meat’ long after the others.

It is hard to explain the glorious feeling of being the only one left with meat long after the meals. You’ll have the others eyeing you and, sometimes, begging for a bite while you chew with wicked pomposity.

Now, let me tell you how this is connected to a chicken head.

First of all, a chicken head, especially when grandma permits that a generous piece of the neck be left attached to it, is very huge. It sits majestically on a plate of rice with tempting grandeur. Again, more often than not, grandma would rate the chicken head less than the more fleshy parts of the chicken. So the head is often than not much larger than the other chunks. Secondly the chicken head is made up of soft bones, flesh and juiciness, especially around the eyes. So you have reason to dilly-dally while eating it and also make small chewing sounds without risking reprimand. Lastly, it is so, so easy to lick off the soup from the chicken head and slip it into your pocket for later chewing – while no adult is watching. I did this countless times.

Because of all these, the chicken head was much sought after by us kids. Fortunately (or unfortunately) grandma never allowed a single person to be so lucky as to get the head every single time. It was rotated, deliberately?). But whoever did get it make sure he or she gloated long enough to make at least one of the others sulk.

How do you eat a chicken head like a pro?

Eating a chicken head is not a task for the uninitiated. To do this would be to waste it. As a matter of fact, eating that prime ‘meat’ is a science.

You start by teasing the meat off from the neck until you reach the wattles, then you bite off the beak and eat a little further. Then you eat the wattles and the combs. Next task is to shave off the skin on the skull. After this scalping, the next thing is to suck out the eyes, one at a time. This is done slowly, so that the juice in the eyeballs spread over the tongue. *Oh, la la!* At this point, the practiced eater will bite off a little bit of the skull. He or she will then such out the brain from that hole. Now, the entire skull can be crushed at once or chewed away in bits.

Each of the above steps is done slowly. Believe me, as a child, I could complete the whole process – from eating the neck to gnawing the skull, in as long as two hours. The longer it lasts, the more the pleasure.

But that was many years ago. Now I can’t even eat a chicken head. It almost disgusts me, especially the eyes when they pop and the once-awesome juice spills.

As I type this, I have three chicken heads and six legs in my kitchen, and I know not what to do with them. My first plan was to dump them in the bin, alongside the innards of the chickens I have just prepared for Christmas. But I can’t. How would I be able to throw away such prime ‘meat’. But I’m no more the chicken head eating pro.

Ah, if only I could be a child again, the champion chicken-head-eater trained in grandma’s kitchen.