WHAT AM I A CHAMPION AT? 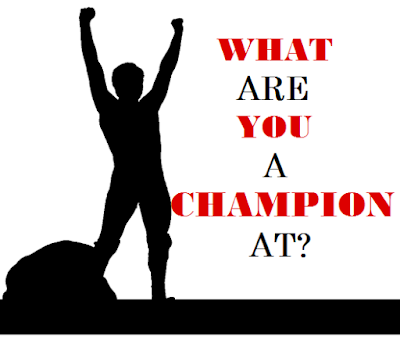 Everyone is a champion, believe it or not, that is an undeniable fact.
But before you go around telling people that one restless nutcase called KIS told you you’re a champion, you should first ask yourself this very important question:

We know that Usain Bolt is a champion on the track, Steven Spielberg in movies, Lionel Messi in Football and Jay Z in rap. Wole Soyinka is a champion in Literature, Olusegun Obasanjo at politics and Aliko Dangote at Economics.
Taking it closer to us, I would say Ebenezer Wikina is a Champion of some sort through his Write Paragraphs and related initiatives, Olulu Holloway is a spoken words champion just like Kemi Bakare while Sir Eriata Oribhabor is champion ‘Merchant of Poetry’.

Bow, back to you – WHAT ARE YOU A CHAMPION AT?

Some people are Champions at


It’s a terrible shame that many of us don’t have any work on our hands.
Do you know yours? Can you point to one single thing that sets you apart, makes you special, turns people to you, make you ‘worshipped’ and ‘needed’?
If ‘NO’, then ask, why? If you get an honest answer from yourself, you are on your path to being a champion too.
You could be tempted to make excuses about how life has been unfair. But we could say the same for  thousands of successful people here on Facebook, people we all know – ordinary people like us who rose out of similar conundrums like us, disadvantaged, doubted, downtrodden and dismissed.

A case study is EBENEZER WIKINA who started WRITE PARAGRAPHS with a tiny Nokia phone, getting excited when interviewing non-entities like Kukogho Iruesiri Samson. Now, his blog is respected worldwide, featuring world power-movers and he writes for Huffington Post amongst many other things.

“Your first project is YOU and until you fix YOU, you will NEVER attain your full POTENTIAL.”Peace be unto you.

PS: I don’t know what I am a champion at. Please tell me if you know.
article determination hope poem religion rhymes self success