MEET SUNDAY OLAKUNLE THE NIGERIAN POLICEMAN WITH A GOLDEN HEART 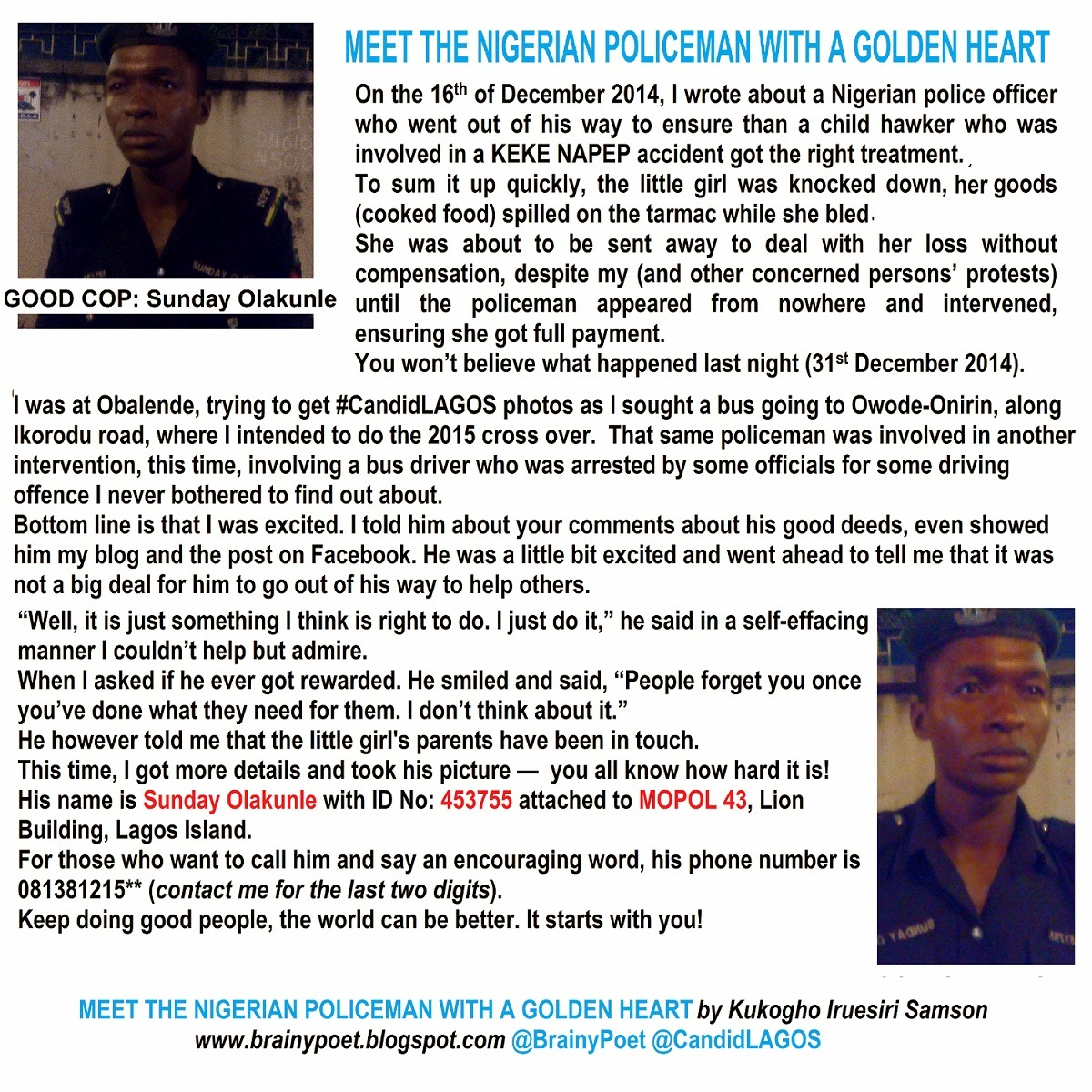 On the 16th of December 2014, I wrote about a Nigerian police officer who went out of his way to ensure than a child hawker who was involved in a KEKE NAPEP (tricycle) accident got the right treatment.
To sum it up quickly, the little girl was knocked down, he goods (cooked food) spilled on the tarmac while she bled. She was about to be sent away to deal with her loss without compensation, despite my (and other concerned persons’ protests) until the policeman appeared from nowhere and intervened, ensuring she got full payment.
Well, you wouldn't believe what happened last night (31st December 2014).
I was at Obalende, trying to get #CandidLAGOS photos as I sought a bus going to Owode-Onirin, along Ikorodu road, where I intended to do the 2015 cross over.
Guess what, that same policeman was involved in another intervention, this time, involving a bus driver who was arrested by some officials for some driving offence I never bothered to find out about.
Bottom line is that I was excited. I told him about your comments about his good deeds, even showed him my blog and the post on Facebook.
He was a little bit excited and went ahead to tell me that it was not a big deal for him to go out of his way to help others.

“Well, it is just something I think is right to do. I just do it,” he said in a self-effacing manner I couldn't help but admire.

When I asked if he ever got rewarded. He smiled and said:

“People forget you once you’ve done what they need for them. I don’t think about it.”

He however told me that the little girl's parents have been in touch.
This time, I got more details and took his picture —  you all know how hard it is!
His name is Sunday Olakunle with ID No: 453755 attached to MOPOL 43, Lion Building, Lagos Island.
For those who want to call him and say an encouraging word, his phone number is 081381215** (contact me for the last two digits).
Keep doing good people, the world can be better. It starts with you!