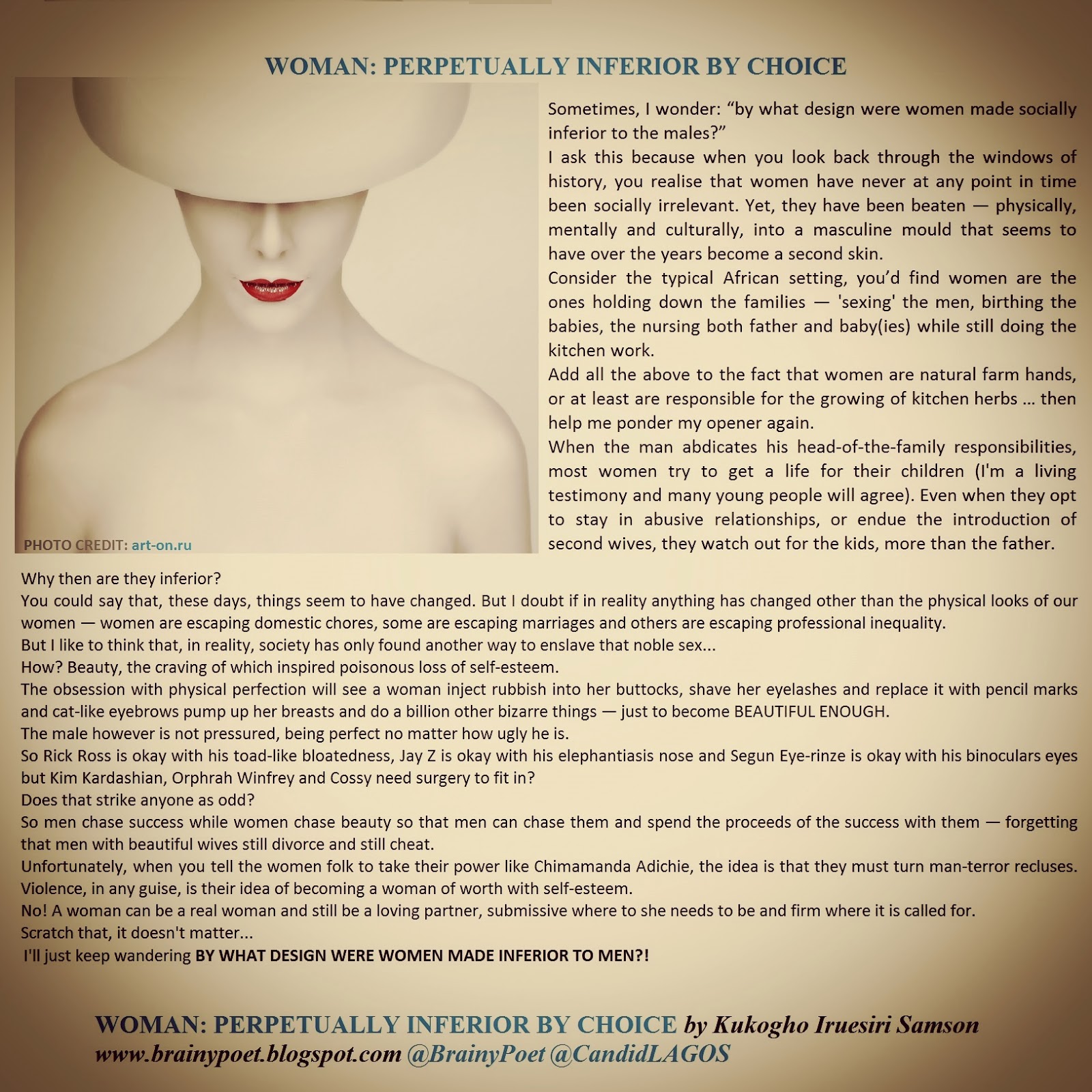 Sometimes, I wonder: “by what design were women made socially inferior to the males?”
I ask this because when you look back through the windows of history, you realise that women have never at any point in time been socially irrelevant. Yet, they have been beaten — physically, mentally and culturally, into a masculine mould that seems to have over the years become a second skin.
Consider the typical African setting, you’d find women are the ones holding down the families — 'sexing' the men, birthing the babies, the nursing both father and baby(ies) while still doing the kitchen work.
Add all the above to the fact that women are natural farm hands, or at least are responsible for the growing of kitchen herbs … then help me ponder my opener again.
When the man abdicates his head-of-the-family responsibilities, most women try to get a life for their children (I'm a living testimony and many young people will agree). Even when they opt to stay in abusive relationships, or endue the introduction of second wives, they watch out for the kids, more than the father.
Why then are they inferior?
You could say that, these days, things seem to have changed. But I doubt if in reality anything has changed other than the physical looks of our women — women are escaping domestic chores, some are escaping marriages and others are escaping professional inequality.
But I like to think that, in reality, society has only found another way to enslave that noble sex...
How? Beauty, the craving of which inspired poisonous loss of self-esteem.
The obsession with physical perfection will see a woman inject rubbish into her buttocks, shave her eyelashes and replace it with pencil marks and cat-like eyebrows pump up her breasts and do a billion other bizarre things — just to become BEAUTIFUL ENOUGH.
The male however is not pressured, being perfect no matter how ugly he is.
So Rick Ross is okay with his toad-like bloatedness, Jay Z is okay with his elephantiasis nose and Segun Eye-rinze is okay with his binoculars eyes but Kim Kardashian, Orphrah Winfrey and Cossy need surgery to fit in?
Does that strike anyone as odd?
So men chase success while women chase beauty so that men can chase them and spend the proceeds of the success with them — forgetting that men with beautiful wives still divorce and still cheat.
Unfortunately, when you tell the women folk to take their power like Chimamanda Adichie, the idea is that they must turn man-terror recluses. Violence, in any guise, is their idea of becoming a woman of worth with self-esteem.
No! A woman can be a real woman and still be a loving partner, submissive where to she needs to be and firm where it is called for.
Scratch that, it doesn't matter...
I'll just keep wondering BY WHAT DESIGN WERE WOMEN MADE INFERIOR TO MEN?!