HUMANITY BEFORE ANY OTHER THING… 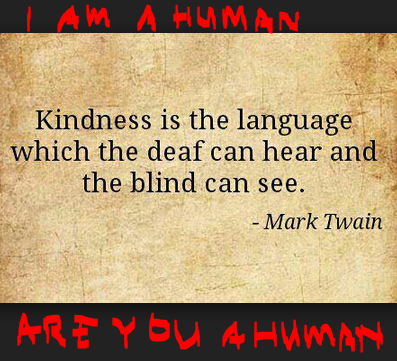 we are first born human
after then, a man or woman
all religion and race definitions
are needless postbirth distractions
an excerpt from the poem: ‘HUMANITY BEFORE ANY OTHER THING...’

many times, in my short life, i have often wondered about the evils around us. i’ve been troubled about how evil the world has turned.
but what bothers me of it all is the fact that humans are becoming more dangerous than the beasts in the wilderness. each one of us may claim to be living the good life, candidates of heaven...but are we truly that?
we are yet to know that our actions and inaction have far reaching implications for us and those around us…
imagine that, in all the scenarios above, i was not helped? would there be a KIS now? i might just have ended up as a street urchin, stabbing people with bottles at a motor park or raiding homes and raping defenseless women...
now, beyond that, who would have helped the girl i helped yesterday? who would have paid the school fees of Peter(not real name) a kid i taught as a youth corp member? who would have started WRRPoetry which has helped a handful of people? who would be writing this right now? who would have ended up in police cell twice, for helping strangers suffering police brutality…

we must know that we are all here for a purpose. that what we have is not ours alone, nor is it our place to automatically delete some people from the list of potential help receivers.
you must first see a human before you see their age, sex, religion, economic standing or any other coloration you have dancing around in your head. you must first try to help.
in fact, it is better to help someone and later realize that you have been cheated or defrauded than to refuse to help and learn later that someone had died, or suffered great harm because you refused to help.
yesterday, a war started on my wall after i blasted two undutiful religious leaders for not living up to their calling. i know that the ultimate principle of Christianity is 'LOVE YOUR NEIGHBOR AS YOURSELF’.
this is a difficult thing for any human, but it is expected that those who claim to lead men to God should do better than the led.
the consequences of not lending a hand are more than the material loss you might suffer for falling prey to deceptive people.
i rest my case.
thank you.