4 POETS WIN COPIES OF 'WHAT CAN WORDS DO' IN MAY #WhatCanWordsDo? CONTEST 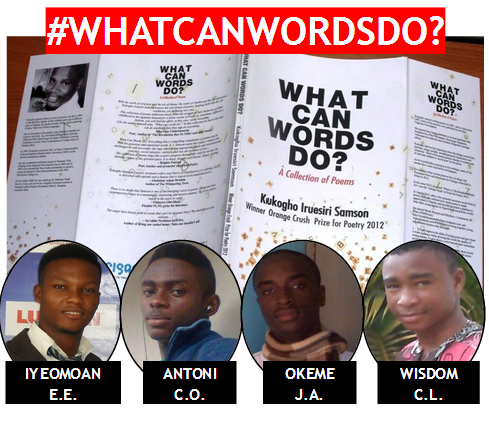 Whooosh! Well done poets!
Like I always say, the poets in this nation must be heard by everyone, even those who claim not to love poetry. The power in a few lines of a poem can do much damage or repairs than whatever you can imagine...
Yeah, the submissions and the judging is over. I found it very entertaining to read through the poems. All stayed through to the theme and most explored all the given themes. I however noticed that the tributes to Maya were somewhat better.

None of the entries was terrible but more than a few were very awesome and worthy for publication anywhere.

It was hard selecting the winners but the job has to be done and done it was – thanks to my bosses James Ademuyiwa Jamesconco and Adedayo Adeyemi Agarau  Their comments as Judges came into play in selecting the eventual winners. Nobody should go and punch them o!

Uncle Jeremiah Peters went ballistics in 'WHY?' and he got the job done!  Proofsegz' poem 'SELF SLAVE OF SELF' is a fine one message-wise but it betrays misjudgment in the diction, with some words sticking out like sore thumbs. Adeniji Olayemi caught my attention with 'MESSENGERS OF DEATH'. Fine words, fine theme, well laid message.
Poet Odunola Don Kolawolu's 'WHAT IS OUR CRIME' has a good message, but the telling was rather weak...needs to be enriched. His tribute, 'SING NOT A DIRGE' was however well executed. He went political in 'ELECTION 2015', 'CAPTAINS OF CORRUPTION' and tackled Boko Haram in '234 FUTURE MOTHERS' and 'UNWANTED GUEST'.
Versatile poet,  Iyeomoan Emmanuel Ehizogie went on a poetry-marathon. He entered lovely poems like 'WE ARE ONE IN THIS FIGHT', THE CLOCK TICKS AGAIN, a politics-themed lament with experimental form, a very mature tribute to Maya, 'REQUIEM TO THE MAY ANGEL'. You need to read his 'ANTI-BOOK RAMS'. LOL!
The political message in Antoni Chidera Okafor's 'GOSPEL' rings clear and true. I loved it and so did Judge Ademuyiwa. He tribute to Maya 'ANGEL'S COO' is a masterpiece...almost rhymed too.
Poet Raphael Bestman Karibo's lament 'IF' deserves a round of applause! I loved it so much that I had to publish it on WRRPoetry. The judges noted vagueness about it though.
My friend Nnawuihe Wisdom-Chisom (Wisdom Chisom Love) spoke the mind of the politically apathetic Nigerians in the poem 'WHY PONDER'. As was noted by Judge Ademuyiwa noted the poet became a soothsayer within the lines. His poem for Maya, 'TRIBUTE' is no less interesting. I find very appealing his 'INHUMANITY', a poem whose message is what we need to hear more of. Same goes for 'FATE' and 'WHO SHALL', political and revolutionary, respectively. Judge Agarau said his eyes remain on him. LOL.
Poet Oluwapelumi Kay, pulled off a fine poem in '#BRINGBACKOURGIRLS', though it needs some editing. His 'Enslaved by greed' spoke the truth about our nation - creatively. '2015 Election' is a fine poem that needs to be spiced up while 'MEN OF EVIL' is another Kay-beauty.
Sir Okeme Jerome Akpevwe's 'WEALTHY BEGGARS' is one of my favourite amongst the political poems entered. Good message and delivery. I could hardly fault 'MAYA LIVES ON' nor pick at his daring, pragmatic 'THE OTHER WAY'. Judge Agarau was obviously pleased.
'SOUND THE TOCSIN' by Jacobs Adewale is not a poem to be ignored. Though I did not get the title, I sure did get the poem.
YOU CAN CLICK HERE TO READ ALL THE ENTRIES.
Anyway, after going through all the poems, here are the winners:

1. Iyeomoan Emmanuel Ehizogie
#BRINGBACKOURGIRLS: WE ARE ONE IN THIS FIGHT
Let the green glowing bulb
Send strange, shinning sparkles
From black veins and dark hides

Permit me to add this...

ANTI-BOOK RAMS
They come in shady shadows
With blind bombs and ghostly guns,
Leaving us to the mercy
Of indelible, gory memories
That paint red our weak walls

Uninvited they come
To steal Ada, Ade and Adamu
Reducing breathing-man to breathless dusts
Though they thrive in our midst
We still must bake brown our broken bread

I honestly do think this poet is one to look out for. His lines, while not boasting of perfection, cab stand the test or originality anywhere. His diction is unique just as his images are always vivid...plus I see a lot of symbolism in his work. Brevity is something some folks should learn from this brother-poet.

2. Antoni Chidera Okafor
ANGEL'S COO (for Maya Angelou)
If we'll study war no more
And leave not saliva prints
Upon earth's rickety tits;
If we'll tell truth beyond
Colours of the skin
Without cynicism freeing sneers
Off our chin;
If we'll forgive our hate
For loving another to stupor
Brotherhood would be our perfect sin

I will stand by this poem anywhere. Yes I would. Though I would like to jazz it up a little if it were mine, this poem works well for me as it is. Here again, I envy the mature diction...building up with linked words, tits and saliva (tongue), rickety, skin colours.... I could write a book from this poem. Good message in there too.

3. Okeme Jerome Akpevwe
MAYA LIVES ON
Like a firm tree you stood
Deeply rooted in your artworks
With large branches you shaded many
And bore bounteous fruits to feed us with

In the land of poetry, numerous are your heirs
Your words are as good as fresh air
And satisfying to the soul when we inhale
For that, your name shall forever be told in our tales
Maya, you live on

A tribute this is! I like the metaphorical nature of this short piece. Maya was indeed a tree with lots of roots and branches. Though the language here is simple and the diction is rather more akin to the usual, it still remains sweetly woven. The connect is there.

4. Wisdom Chisom Love
INHUMANITY
Man’s inhumanity to mankind
We have thus seen it all
How houses and streets are burnt
Like Sodom and Gomorrah’s fall

Alas! They only live to maim
And with terror, they seek fame

Fine piece well pieced-up. The theme of Boko Haram was clearly trashed out without having to mention that word. What this does to the poem is make a general sermon against violence and that is a good thing. Good words choice and the allusion to Biblical Sodom is awesome too...there were also partial rhymes.

Our winners have now become part of the judges for the next round.
>>>>>>>>>>>>>>>>>>>>>>>>>>
If you have been writing and you are yet to win, keep penning.
Remember that the idea behind this is to encourage the young ones to write, not just to win anything. But even at that, there are many more copies of ‘What Can Words Do?’ to be won.
DO YOU WANT TO WIN TOO? YES? THEN WATCH MY WALL FOR THE ANNOUNCEMENT OF THE JUNE EDITION...
To buy a copy of ‘What Can Words Do?’ call me on 08060109295.
Words Rhymes And Rhythm...building the future poets!
Thank you.
#BringBackOurGirls #WhatCanWordsDo? Maya Angelou nigeria poetry politics violence war