SHE DON GET BELLE: IS MARRIAGE NEXT? 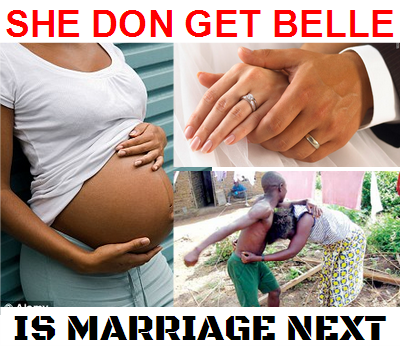 you did the waist dance
you the pot, he the lance


Girls: a guy gets you pregnant and your parent say he must marry you, despite the fact that he has expressly said he doesn't want to marry you, especially after the pregnancy saga. In fact, the bastard was quite emphatic about 'flushing the thing' out. Perhaps he even threatened to kill you.

Guy: you impregnate a girl you never had plans to marry and now you are being forced to marry her. You do not want 'to have and to hold'. The reasons are best known to you but the family is prepared to put you in Kiri Kiri to make you an in-law.

What will you do?

I'm sure some people will by wondering if I have planted fertile seeds in someone's farm without first paying for the land. Anyway sha, I neva even get babe sef...

ecstasy in the arms of carelessness
careless seeding - hearts are restless

Anyway, this came up while I was chatting with a noise-maker Facebook friend of mine of mine yesterday (yeah, its a female *smiles*). After running around mundane topics we got talking about love, pregnancy, and marriage.

It is no strange thing to hear that a girl aborts after her 'lover' rejects her royal 'pregnantness' or even commands her, Hitler style, to get the thing removed. We have heard of parents, trying to 'keep the family name untainted', financing the removal of 'bastard' foetuses.

As an undergraduate, I witnessed one rather bizarre situation: a girl got dumped after getting pregnant and another guy (my 'friend') paid for her abortion and proceeded to date her. Dem no last pass 6 months sha...

But enough of abortions. Lets talk about the reverse scenario, where marriage is forced, as punishment for sexual waywardness. I ask: Is pregnancy a call to marriage?

to be
a single mother
reading spinster tips

Must a girl and boy be forced to marry each other because they have created someone illegally? There is no gainsaying that the girl stands to lose the most. Yes.

Meanwhile, the randy penis is out there, unencumbered. At best, he is asked to pay some money for bills.
What is the alternative? For the 'unlucky' lad forced to live with the girl, he only has to drop some coins every now and then.

He is totally free to go after another fertile ground. He is free to farm around, as long as he allows the girl to stay...shebi?

In the end, the girl still loses. So I ask: Is there an alternative to forced union?

or be
a wedded 'bother'
under manly grips?

One thing I do know is that most pregnancy-forced unions, especially those ones where one party, usually the male, is clearly against it, end up in abuse. The man will see the girl as an unfortunate twist in his life tale.

Imagine a graduate, working in a bank, now forced to marry an uneducated 19 year old daughter of an akara seller. The idiot did not know, during the waist dancing, that she was below his standards.

the girls whose lips was 'softest'
soon turns something to detest

Belle enter, garri come pass water! The banker becomes the beast, the girl foisted on him becomes a frustration vent.  In the end, she will wish she never agreed to marrying him.

I believe parents ought to consider this when cases of pregnancy come into play. This is more important where the girl involved is too young. Perhaps she is a secondary school student, or not even in school at all. There is a choice.

don't force the dog to eat the bone
recook the bone, leave the dog alone

For me, what matters most is what happens to the pregnant girl and the child she is carrying. They have a future that may be jeopardised if placed into the hands of a disgruntled guardian.

It will be a very costly mistake to make an in-law of an irresponsible man; irresponsible is any man that rejects the girl she put in the family way. Don't bite what you can't chew and swallow.

You just might be setting up your daughter for a Nazi-concentration-camp-styled home.

to live
alone with hopes
of coming change

So, to sum my argument, it is better to seek a more profitable arrangement. That your child was impregnated by a riff-raff doesn't not mean you must gift her to the same riff-raff.

The mistake has been made, she is no more pure, so to say. But there is a lot you can do.

For one, you can make the unwilling 'impregnator' pay. This 'pay' could include making him sign an agreement to foot her hospital bills and contribute to the child's upkeep. If he is rich enough to give money for your child's upkeep, make him pay something tangible via legal means.

Getting the both families, police and courts involved is not a bad idea.

or live
bound with ropes
of vows exchange

The marriage-by-force option is a trap. It works in a few situations. But with the loss of societal morals, the loss of respect for family and parents, a bastard by-force-in-law is not the best guardian for your daughter, pregnant or not.

What do you think such a man will do to your child? He sees her as a setback in his life. As such, every misfortune will be paid into her account.

Don't sentence your child to a life of abuse and regrets!