AFTER WE DESTROY MOTHER EARTH... 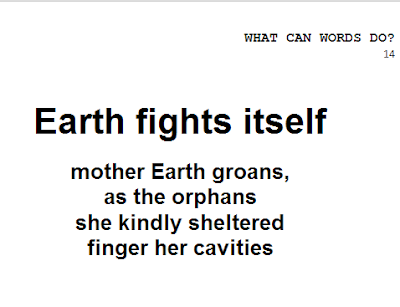 The second chapter of my book What Can Words Do? addresses one of the issues that bothers me a lot, maybe even as much as domestic violence and women abuse; it is the abuse of Earth, our only home.

Sometimes, it seems we are deliberately harming her, just to see what the effect of the destruction would be. I see it as the ultimate suicide and I illustrated this in my one word sonnet 'Sandy Suicide'.

From the villager in the bush who fells trees at will to the lumberjack who leaves a whole forest destroyed because of a single tree he wants to make planks; from and the men burning refuse indiscriminately to the women dumping drapers and kitchen waste in gutters; from the man importing chemical waste to bury underground to the company passing its toxic waste into open rivers; from the government official signing deals with multinationals to allow them dump all sorts of waste (electronics, second hand goods, toxic waste etc.) to the fisherman pouring chemicals into rivers, just to boost his haul of (poisoned!) fish; from the man that builds houses on waterways to the miners in the underbelly of the earth....

The list is endless and the danger is real!

Some of our perceived scientific discoveries, some of the researches, I fear, are going to end up making us wish we never attempted them. Genetically modified foods, playing God through some bizarre sciences like sex change, animal cloning (I saw some pictures of cloned animals and I shuddered)...

Some of these things are quite good. Genetically modified foods could help fight hunger and famine (they say), medically, we've been able to battle some diseases (but how many more are we creating?)...

He shouts...
I shall make forests
Out of dry deserts' sands,
Give 'Him' pointed breasts
And 'Her' sperm glands.
...and he does!
~ from THE SHAME OF MAN

What of the ozone layer? What are our technologies doing to the atmosphere? How clean is our air? Ask the Chinese...they need a decade to clean up their air... Carbon emissions are threatening our very lives, but we are creating more and more 'unclean' technology.

In the folly of his wisdom,
He brews the wine of truth
With fermented grape of lies,
And lays tomorrow's coins
On the Devil's gambling table!
~ THE DEVIL’S GAMBLING TABLE
So when earthquakes, acid rain, drought, flood, strange diseases ravage us, who do we blame? Who else but ourselves? We are so wise that we want to know what is in the deepest of the earth, sea...what was 2 million years ago and what will be 2 million years to come.

Yet, we seem not to see what we are heading toward...doom!

What have we become, we sons of men,
Now that we've made of Earth a killing den?

Do you think the dead can breathe again?!
Or a corpse, nurtured with sun and rain?
~ MEN OR BEASTS?

Perhaps the most dangerous act of men, driving us faster to destruction is the art of warfare. The loss of lives, the fires, the bombs the smoke, the waste of resources...all in the name of war...Oh God! We are fools!

If the funds wasted on warring were to be used in repairing our planet, we would live in paradise. The US budget alone would make Africa the paradise it once was.

Imagine if Nigeria had spend its 2013 security budget on settling ASUU, instead of shooting terrorists (and innocent folks).

Ah, we are all gonna be dead soon!

Maybe there'll be a Fire Age, since we've had the ICE age. Our ozone layer may catch fire someday and we'll all be roasted, a kind of Hell for our evil deeds.

Well, I for one will try my best: No arbitrary dumping of refuse, no setting fires, use my energy well and plant trees (or any other green thing) when I can.