AT EASE UNDER THE BRIDGE? 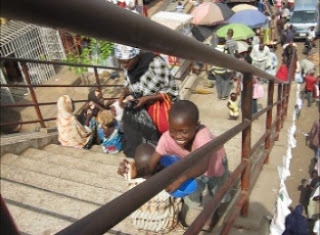 Little Suleiman, no more than five years old, climbs up and down the overhead bridge in a carefree manner seemingly at ease with the environment. He seems oblivious of the wild honking of the ‘Danfo’ drivers and the gruff voices of the ‘agberos’ calling passengers to their vehicles.

As he plays, a woman beckons him and hands over a 50 naira note to him. Elated, he dashes down the bridge and under where many women, children and babies are sitting.

The place is the overhead bridge in Mararaba town, Nasarawa state. The area around and under the bridge is very dirty. The ground is littered with refuse, food remnants and the ever present pure water sachets. An open, foul smelling gutter flows behind the bridge. It is a very noisy place with the honking of the vehicles and the shouts of the ‘agberos’ as well as the loud music coming from loudspeakers around the place create a cacophony of sounds. Pick pockets and their likes find it a very agreeable place. There is hardly a day that passes without at least one person being a victim to their thievery. Simply put, the place is a very dangerous place.

It is here that every morning, a group of women between the ages of 25 and 60 converge. Many of them are nursing mothers while a few are pregnant. They come along with little children; mostly female and little Suleiman is one of them. There are a couple of older women with children too young to be theirs, probably grandchildren. It is to one of such women that Suleiman hands the 50 naira note he was given. 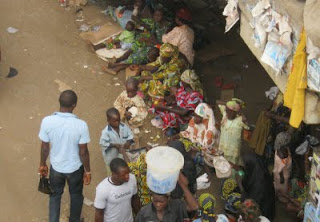 Fact is that these people are beggars of a unique sort, a special order of refined beggars. They do not accost passers-by with their plates or arm-twist as most conventional beggars would. Rather, they sit down patiently, generally carrying as though they were in their homes, straining their voices as they share lively banter amidst the cacophony of sounds around them. They behave like one big family with the children mixing up like brothers and sisters.

The most peculiar thing about this group is not their orderliness and composure but the fact that they seem to be completely at home there under the dirty bridge surrounded by noises from the ‘agberos’ and the blaring speakers them. 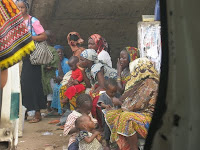 Another peculiarity of the group is that none of them seems to be physically handicapped. In fact, it would be hard for one to consider them as beggars if they were not sitting there under the bridge receiving hand-outs from passers-by. They are just like any other women on the streets with a children.

Once in a while, a Good Samaritan comes around with a token for them. Gift items range from low denomination naira notes to cooked food, raw food items, clothing and other household items. Some of the benefactors dole out money to each person in the group, receiving prayers in return.

Whenever a bundle is brought by a Good Samaritan for them to share, a little stampede is generated as they all scramble for a piece of the bounty. In a few minutes, it is all over and they are back on their mats, back to their chatter and occasional banters, as though nothing had happened.

I shared some moments with them and was able to speak with some of the women. Most were unwilling to speak on record. I gathered from the chats with them that many were there because of broken marriages. They all expressed the willingness to work.

Ramatu, one of the more elderly, about 50 years of age said she was there because she had no job and nobody to take care of her. She said, “I don’t have a husband and I don’t have a child. If I get a job, I will do it.”

One of them, a widow by name Habeeba, wept as she spoke about her problem. Lack of an alternative source of livelihood after being booted out of a turbulent marriage made her resort to begging she said.

“I have children but I don’t have a husband. My husband divorced me some time ago, seven months after which he died. He has been dead for about six months now and that is why I am here,” she said in tears.

When asked about their pregnancies and babies, the women were very secretive, offering little useful information. The people who carry out businesses around them and other pedestrians however talked about these women and their plight.

Mr. Abba, a civil servant in the FCT laid the blame on the prevailing poverty.
“You can’t blame them for coming here, since where they come from in their localities, they lack what to eat, and where to take shelter. They lack everything so they come to the city to find greener pastures,” he said.

A trader who sold groundnuts just a stone’s throw from the bridge revealed that one of the women had once been delivered of a baby right there under the bridge with the other women serving as birth attendants.

Commenting also, Mary a hairdresser said, “It is true that someone gave birth here. We were all here. They covered her with wrappers and she had a safe delivery. The baby should be about six months now.”

“The question is how did they get to be pregnant? The beggars are of both sexes so what do you expect?” Mr Abba said.

Abdullahi sells clothing items just behind the women. He revealed that the women came from different states especially Kano and Jos. He said a few of the women had husbands. 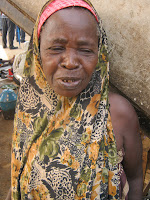 “A lot of things bring them here,” he said.“Some are here because they couldn’t live peacefully with their husbands. Others come here out of greed after hearing stories of the way others make money begging here,” he added.

Another trader Abdulhamid who sold jewellery said he did not know much about their individual problems but believed that most of them had genuine problems.

“Most of them have problems in their marriages but some of them are also greedy and they run a way from their husbands to come and beg here,” he said.

It is worth wondering why an able-bodied married or unmarried woman will opt to sit under the bridge idle, willingly or not, begging for a livelihood. Most of the people spoken to blamed the situation to poverty, governments’ insensitivity to the problems of the people and the loss of dignity caused by fellow human being.

Mr. Abba said, “Our leaders are not using our resources honestly, and the government’s presence is not felt in the grassroots.”
Expressing a different view, Mr Onyekachi Emmanuel said begging was more as result of laziness and lack of seriousness, maintaining that people should not always rely on the government for help. 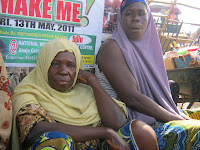 “We always seek from the government when sometimes we should contribute to the government. They should try to start a little thing because it is until somebody sees that you are serious that he can help you,” he said.

“It seems like it’s a culture to beg,” said Mrs Kate. She called on the government to move the beggars from under the bridge and provide a good place for them to live. “They are becoming a nuisance under the bridge. These kinds of cases are for state governments. Lagos state for example has done away with beggars on the streets.

“Government should come and help them. They need help as some of them don’t have husbands. When you ask them why they beg, they will tell you that they don’t have any other thing to do,” she said.

The health hazards they face there under the bridge is in itself a reason for concern. Buses pass just a few feet from where they sit putting them at the risk of accidents. Also open gutters flow behind them. They eat and drink with the foul air of the gutters all around exposing themselves to harmful germs.

Some people have even speculated that the women stand the risk of being exploited by unscrupulous men who might want to take advantage of their insecurity to exploit them sexually and otherwise.

Beyond all these, what does the future hold for children like little Suleiman who find themselves caught in the vicious circle of such circumstances, not out of their own wish but which they cannot but accept?

Only the future will tell their story in full.
article crisis politics society