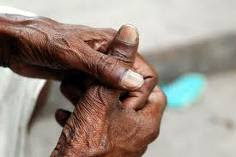 These our hands, five fingers
Two palms, twin bringers
The creation of God from earth
Earth? So they are mere dirt?
Earth perish at the hands of earth
This I ponder sitting at my hearth

Man’s hand ten brothers of terror
His brain, porridge of horror
I look at his eyes, binoculars of greed
That overlooks what they need
His mind, the war map that never fades
His soul, the citizen of hades
The forests that was green

The rivers where the fishes swam
In whose banks roam the footless clam
The corral and the reefs, the oysters
The plankton and the river monsters
Do they not now smell and prick our noses
Like the stench of sewage hoses

Ten fingers pick a willing knife
And plunges into his wife
Ten fingers that gave a golden ring
Now makes the woman cringe
Ten fingers hold down the little girl
As into her, the penis is hurled

These hands or our, so little
Ten fingers strong and brittle
That dares the forest and the mountain
And makes of them a plain
Shall one day, in their time and turn
Lie under earth and never turn.